Hopefully, for those who work or start working with GeoServer, recently Packt Publishing has released a new book titled GeoServer Beginner's Guide. 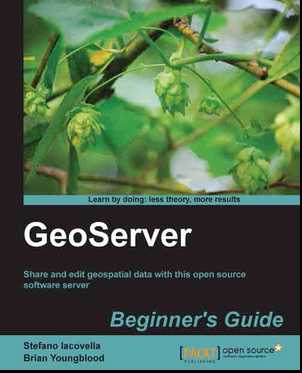 Written by Stefano Iacovella, with contributions from Brian Youngblood, the book guide us on the main topics to work with GeoServer, through the next list of chapters:

Despite of its title, the book is great from newbies to those with intermediate knowledges on GeoServer, and also put some efforts on advance topics, like performance and configuration for production environment chapters.

Personally, I like the way Stefano writes: simply, plain and, most important, making clear complex questions. In addition, the book is plenty of samples and figures which help us to understand better what is talking on.

The book introduces us in the GIS world  (chapter 1) starting with an introduction of many related topics: projections, coordinate systems, modeling information, etc. After this, it shows how to install GeoServer (chapter 2) in two different operating systems: Ubuntu Linux and Windows and finally, passed to show the main aspects of the administrative interface of GeoServer (chapter 3).

From here, the book covers the main aspect on how to access, add and serve data (chapter 4 and 5), how to style to serve them in a better way (chapter 6) and basic samples on how to create maps against GeoServer using Google Maps, OpenLayers and Leaflet libraries.

The third block, concentrates improving the performance of the server using the GeoWebCache system (chapter 8), administer GeoServer via its REST interface (chapter 9), securing its access and administration (chapter 10) and tune it up ready for a production environment (chapter 11).

The book is mainly oriented to WMS but dedicates the chapter 12 to talk specifically on WFS and WCS, also supported by GeoServer.

Without a doubt, GeoServer Beginner's Guide is a book must be on your working table.